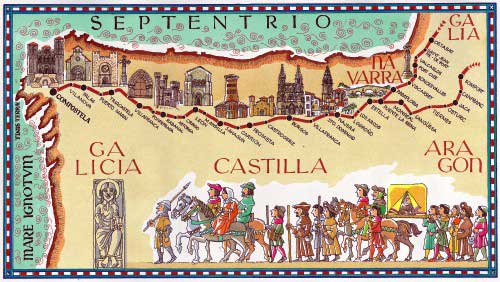 What´s the Codex Calixtinus? Why is it on the news?

The Codex Calixtinus is a 12th -century manuscript jewel, considered the first and most famous guide to the Camino of Santiago. It is attributed to Pope Callixtus II and it is also known as Liber Sancti Jacobi or the Book of Saint James. It was intended as a guide or advice for pilgrims walking the Camino of Santiago but also includes sermons, a set of musical pieces, hymns, descriptions of the route, works of art to be seen along the camino, customs of the local people and reports of miracles associated with Saint James. Why is it on the news?

The volume was kept in the Cathedral of Santiago until 2011- the year in which it was stolen from the temple by a former employee, who kept it hidden until police found it a year later.

The theft of the Codex from the shielded chamber in the cathedral which houses the most valuable works of the archive, kept society and the police in suspense for twelve long months. On the 4th of July in 2012, the Codex appeared wrapped in a plastic bag in a garage in the town of Milladoiro (a town in the council of Ames, bordering Santiago) to a property owned by a former employee of the temple, a native of Compostela and electrician that had in his power, not only the manuscript but also other objects of great value, for years, had been stealing bit by bit from the sanctuary of the apostle and also had a sum of money amounting to more than one million euros. This accused electrician was called Manuel Fernández Castiñeiras and he had worked at the cathedral for more than 25 years before being made redundant in 2011. At the time of the codex theft, he had been suing cathedral authorities for wrongful dismissal.

Four years after the Codex Calixtinus was stolen from Santiago´s cathedral, the electrician José Manuel Fernández Castiñeiras, his wife and his son face possible  prison sentences of 31 years as well as fines of up to 2 million euros for theft and money laundering. Prosecution is expected to argue theft was not motivated by greed but by a desire for revenge on the cathedral clergy over failure to give the long-serving electrician a work contract. Lawyers for the defendants, who all appeared in court on 22nd January 2015, argued for over two hours that the majority of the prosecution’s evidence and in some cases the methods with which it had been acquired was not legally admissable. The evidence included phone taps of the family flat, a security video showing his suspicious way of acting and proving his money laundering and a now-retracted confession by Mr Fernández Castiñeiras. More than 60 witnesses are due to testify in the trial against the former electrician. Thanks to his job for so long time in the cathedral, it is claimed, Mr Fernández Castiñeiras was able to make copies of several keys. It´s very interesting to watch this video in which he is seen stuffing wads of money into his pockets in the cathedral offices. http://www.antena3.com//videos-online/noticias/sociedad/imagenes-que-revelan-robo-codice-calixtino_2015011800134.html